This morning, I was devastated.

Right now, I feel nothing.

Ladies and gentlemen, the “Internet’s Boyfriend” is dating the “Internet’s Most Famous (Ex-)Girlfriend”. It’s another day in what Demi Lovato (to drop another boldface name) once called “The La-La Land Machine.” We could read into this and talk about how it’s always the pretty and popular girls who win, or how the ethics of dating are nebulous, or how celebrity culture brings out the internalised patriarchal instincts in us, or whatever…but let’s be honest: whatever these two rich and famous people do with their lives will have absolutely nothing to say about ours.

I started disliking Taylor for a very elemental reason, and I’m not going to be be afraid to admit it, because if we’re going to talk about “shaming” here I think we shame girls too much for opening up about their demons. For even having demons. So here goes: I started disliking Taylor because I was (am!) jealous. She is everything I will never be: pretty and popular, well-loved and successful. She is impossibly long legs and skinny waist and hit songs on the radio that I will only ever cover (shameless plug!). She and her model-squad of curated gal-pals stand as stark contrast from me, a girl who is constantly counting her few friends on her fingers, bending over backwards wearing masks to keep them, and, after everything, never truly trusting if they’ll stay.

I hate(d) her because she makes me feel like all the worst parts of who I am: unpretty, unsuccessful, unlovable, unimportant. She was (is) the visual representation of all my insecurities, and that slight veneer of production that permeates her every move does not help things. In Ms. Swift’s own words, “She’s cheer captain and I’m on the bleachers.”

(I wonder, when she was writing that line, if she ever saw herself as becoming that girl who wears high heels and short skirts while her fans wear the sneakers and t-shirts.)

On the flip side, I loved (past-tense; after the backlash, I’ve decided that being a rabid celebrity fangirl makes me too vulnerable) Tom Hiddleston for a very elemental reason: he seemed to be everything I wanted. Smart. Articulate. Funny. Gentlemanly. Cultured. I’m a reluctant romantic, but when I’m hit I’m helpless, and I was helpless to the scrunched-up laugh and modulated voice and almost-inhuman charm blended with a perfect awkwardness.

(Funny how, now that I’m describing him, I realise how much of a male Taylor Swift Tom Hiddleston is. Hmm. Maybe they are perfect for each other.)

I loved him because he gave me hope in high ideals. He was (is?) a visual representation of all my, to drop another Swift lyric, “Wildest Dreams,” because obviously a “wild” Frankie envisions hand-holding and cups of tea (I am a terribly boring, grandmotherly millennial, and not in the twee Swifty way either.) and reading poetry aloud and awkward laughing and bad dancing. How can a girl who has never been in a relationship resist this almost-perfect fantasy, especially when, where she is, she feels terribly alone?

I hated (yes, past tense; I’m done caring) them together because, well, you can do the math, right? The issue was never Tom and Taylor themselves—I don’t know either of them well enough to actually care if they’re in love or not—but what they symbolised: the perfect boy getting scooped up by the perfect girl I’ll never be.

When I first saw the news, flipped through the pictures, and felt that strange stab of pain twisting in my chest, I wondered at my reaction. I tried to justify it as just fangirl grief. But the truth is, the problem is less of my grasping, delusional, fangirl self (a self that often laughs at how crazy I am, like attempting to steal the cutout of Hiddleston from the Coriolanus showing) and more of my raw, broken, inner self. A self that doesn’t feel beautiful, no matter how many times I take to the mirror to try and “self-care.” A self that, even after three months of teaching her face to read “I’m fine,” still feels the familiar burning behind her eyes when she holds back tears she promised not to cry at work, staring at the people she thought forgave her mistakes still snub her.

A self that constantly feels she will never be good enough.

Maybe—probably; I know I’m being a bad feminist—I am wrong about caring so much (though, in my defence, I never called out Ms. Swift’s boyfriend record or so-called “serial dating”). The truth is, though, caring about Tom and Taylor hurt a sight less than ripping myself open like this, examining the why and wondering if it ever gets better.

Does it ever get better? I hope so, but honestly? I don’t know. All I know is, you girls in the sneakers and t-shirts, if your reasons are, deep down, the same as mine, know you’re not alone, and that I don’t judge you for the violence of your reactions, or the fear that you’re trying to push down with every all-caps reiteration of old gossip. We will never be the girls brave enough to flirt and dance, to flutter and glitter and shine. But the world needs us just as much as it needs Taylor Swift.

I don’t know how not to hate myself. Not yet. But one day, I’ll learn. One day, I’ll look at my body and I won’t see Taylor’s ghost. One day, I’ll bump into real love and forget Tom Hiddleston ever existed. Or that will never happen but I won’t care because I will have been able to let go of all these unreasonable expectations, and just be me.

Maybe instead of tearing each other apart, we can actually build each other up. Heaven knows, I need a hand to hold, and I’m not afraid to hold someone else’s. Maybe if we can just tell each other it doesn’t matter if we’re not the perfect girl—say it loud and enough times—we can drown out the demons that make this madness possible. Maybe.

Anyway, at the end of the day, just know that Tom and Taylor being with each other says nothing about you or your life or your prospects.  There’s no reason to cry.  You can leave them alone.  You’ll be okay.

As promised, today was my second attempt at Normcore.

Technically, normcore should be as plain as possible, but obviously, I wasn’t able to resist a few extra touches.  The checked socks (adorable tabi-style socks I got from Japan but have only managed to wear today), rainbow-grommet sneaks, and cross necklace are all technically a no-no, but I kept them anyway because I felt they made the outfit more me.

Nike made me pose this way.  (All photos are by Nike Amistoso.)

Honestly, I feel this look is more 90s Seattle Grunge (hello Stories Told) than “normcore,” but Arra said she’d give it a pass.  Yay!  Or not.  Apparently, both Arra and I, along with every other style blogger and fashion mag, have this whole “normcore” thing completely backwards.

Right as normcore’s style was rising in the West, Dazed Digital did a piece on trend agency K-Hole’s (the guys who came up with the term to begin with) interpretation of the whole affair.  According to them, normcore has absolutely nothing to do with fashion, and everything to do with personality–specifically, the fluidity of identity common in millenials (i.e. the hipster generation).  In the words of LA-based journalist Christopher Glazek (the chosen spokesperson for K-Hole):

Normcore means you pursue every activity like you’re a fanatic of the form. It doesn’t really make sense to identify normcore as a fashion trend – the point of normcore is that you could dress like a NASCAR mascot for a big race and then switch to raver ware for a long druggy night at the club. It’s about infinitely flexible, sunny appropriation.

Basically, the point of normcore is not mastering a single, nondescript, “lazy” style, but rather be able to adapt to any subculture or crowd, embracing their style and spirit wholeheartedly.  It’s dressing as a Dalek at NexCon, but being equally comfortable in body-con and platform sneaks at an Icona Pop concert.

What everyone’s been going gaga over is a trend that K-Hole calls “Acting Basic,” which is defined as “…dressing with forced neutrality in order to avoid standing out.”  How the socks + sandals look factors into that definition, I don’t know, but suffice it to say that it is Acting Basic (a concept that, according to K-Hole, is so several seasons ago–in fact I saw what would come to be mistakenly called “normcore” sported quite well by a lot of Korean/Japanese fashion bloggers, several years back) that has filled the internet with mom/dad jeans and running shoes.

With that cleared up, it’s pretty apparent that I won’t be mastering the chameleonic art of “normcore” anytime soon.  Instead, I’ll go back to doing what I do best: acting weird and sticking out like a sore thumb. :)) 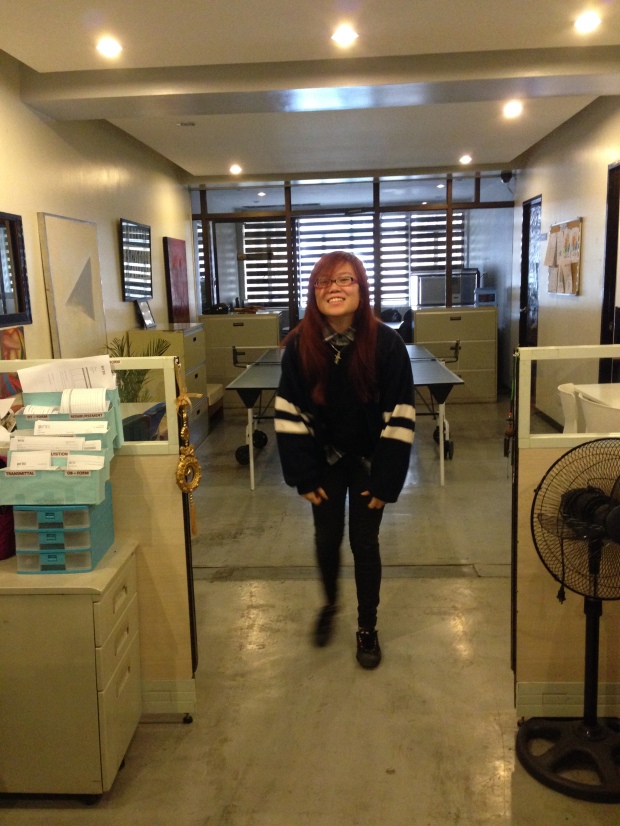 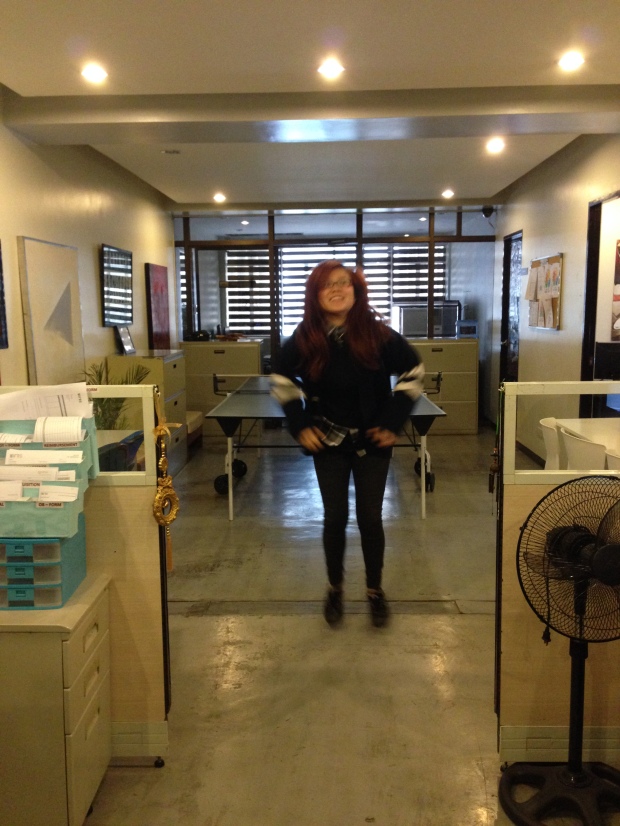 Lift-off!  (Sorry for the belly shot.) 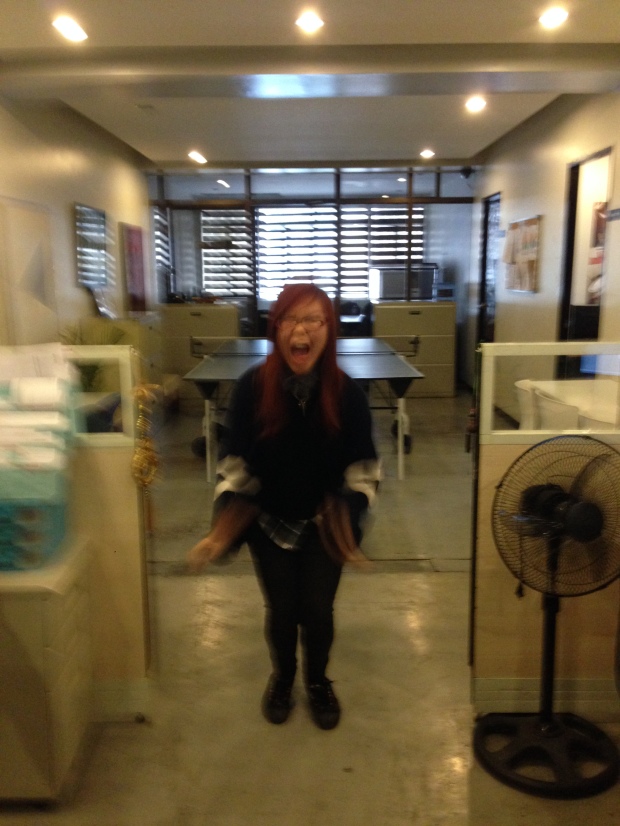 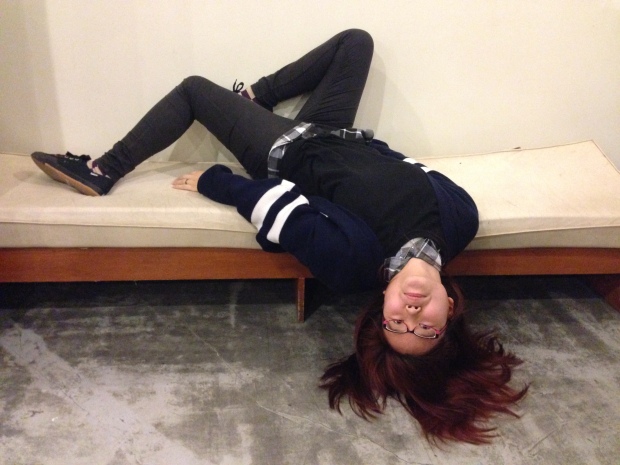 Well, this is one way to come up with ideas…

Credits to Mike G. for suggesting this pose…ow.

So that closes out my #ootd-laden work-week!  Hope you guys have a great weekend!

The old temple. . . #Jerusalem #Israel #Temple #HolyLand #pilgrimage
"It is of the Lord's mercies that we are not consumed, because his compassions fail not. They are new every morning: great is thy faithfulness." Lamentations 3:22-23 (KJV) . I think I could be better. I hope. . #Israel #HolyLand #Jersualem #travel #wander #journal #journey
"Because of Christ and our faith in him, we can now come boldly and confidently into God’s presence." Ephesians 3:12 (NLT) . Breathe on my weakness. All I have is Yours to use. Make my whole life your Upper Room. . #HillsongQuotes #Awake #HolyLand #Israel #TheUpperRoom #journal #devotion #ENFast2020 #travel #ipreview via @preview.app
I'll walk where You walked if You walk with me. . "When you go through deep waters, I will be with you. When you go through rivers of difficulty, you will not drown. When you walk through the fire of oppression, you will not be burned up; the flames will not consume you." Isaiah 43:2 (NLT) . #Jerusalem #TheHolyLand #Israel #travel #traveldiary #ENFast2020
Follow Actually, Frankie on WordPress.com
%d bloggers like this: